Switzerland castles are among the most visited tourist attractions in Switzerland. Whether your travels in this landlocked nation take you to lakeshore cities or to quaint villages high in the Alps, you’ll find a picturesque castle nearby waiting to be explored. Most were constructed during the Middle Ages, offering you a rare glimpse back into times long past. These castles in Switzerland are sure to capture your imagination and make your visit to the neutral nation a memorable experience.

You May Like Also : 16 Uniques and Unusuals hotels in switzerland 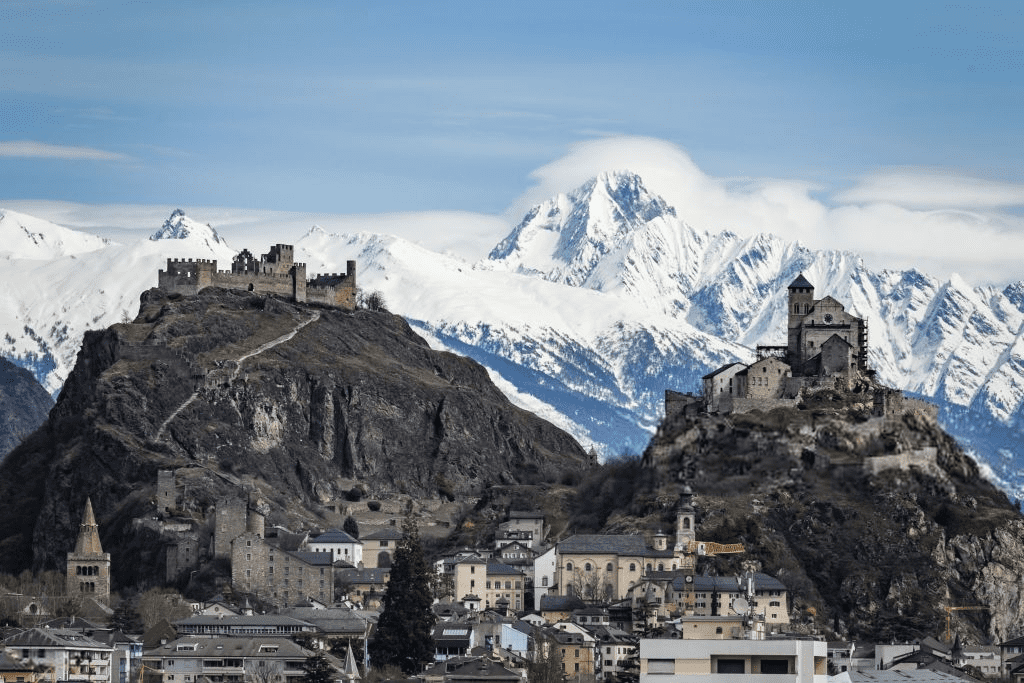 Sprawled out along the crest of a rocky peak overlooking the city of Sion, the ruins of Tourbillon Castle date back to the 13th century. Built during a time when the Roman Catholic Church held sway in the southern region, Tourbillon Castle served as the residence for the Bishop of Sion. Although the castle was laid to ruin by a fire in 1788, a 15th century chapel ornamented with frescoes survived the blaze. The climb up to Tourbillon Castle is steep, but the stunning views offered from the battlements make the trek well worth the effort. 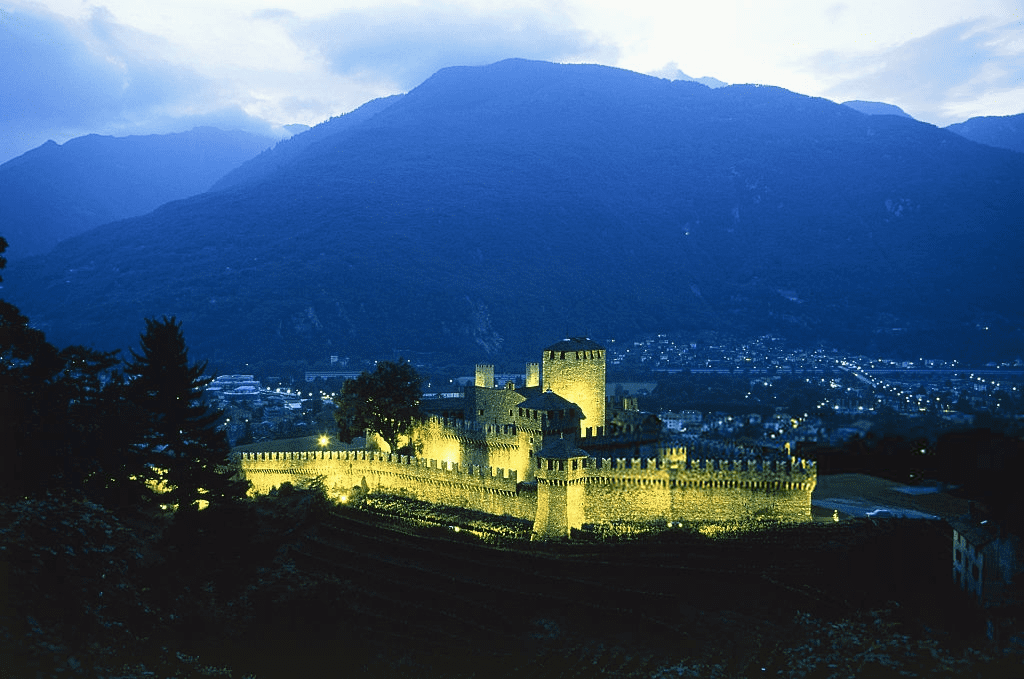 Perched atop the hills of Bellinzona in the Swiss canton of Ticino, Montebello Castle is one of three fortresses that once protected the ancient city. The castle was built in the 14th century, expanded in the 15th century and renovated to its current state in the early 1900s. The castle is now home to the Civic Museum, which includes archaeological artifacts from prehistoric burial sites in the region. Well-maintained walkways on the castle’s battlements let you enjoy panoramic vistas of the city.

Perched on a hill overlooking a small hamlet of the same name, the castle of Tarasp is located in eastern Switzerland between the borders of Austria and Italy. Parts of the structure date back to the 11th century when the region was under Austrian rule. Today, the citadel is privately owned, but you can still view many of the beautifully restored rooms, including the castle chapel, through scheduled tours. The castle grounds offer sweeping views of the pristine lakes and Alpine mountains of the Lower Engadine region. 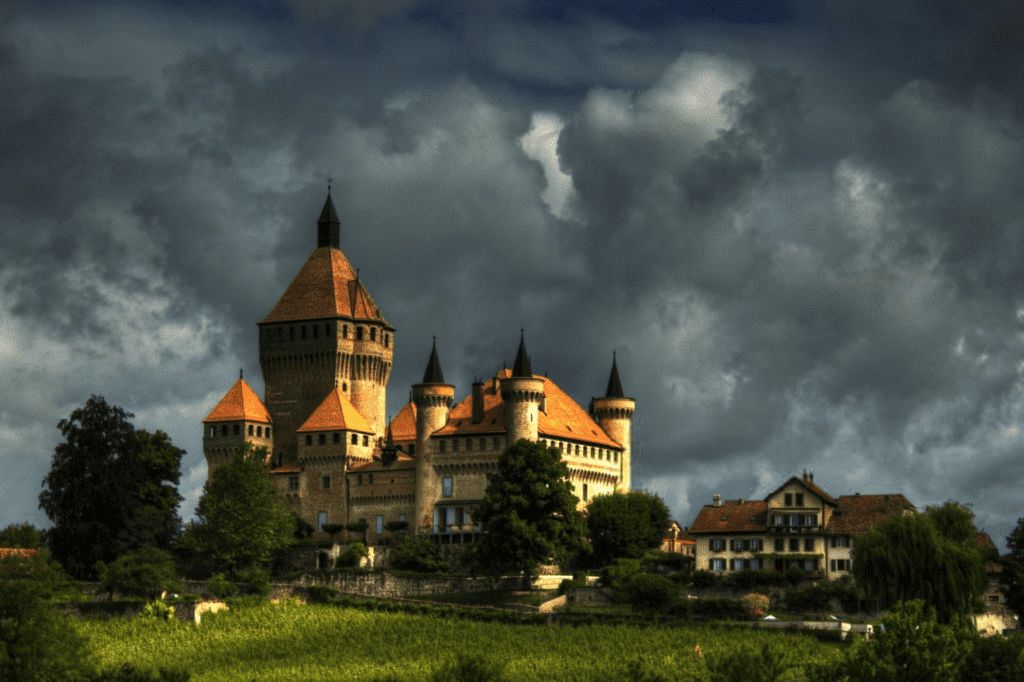 The pride of its namesake village, the Vufflens-le-Château is a 15th-century castle best known for its towering central tower. It’s considered one of the best examples of the Vaud fortresses built in the Late Middle Ages. Although the brick structure with its mammoth square towers is privately owned and not open visitors, you’re free to take in its splendor from the surrounding countryside. Located a short distance from the northern shore of Lake Geneva, a stroll through the nearby vineyards offers picturesque views of the castle. 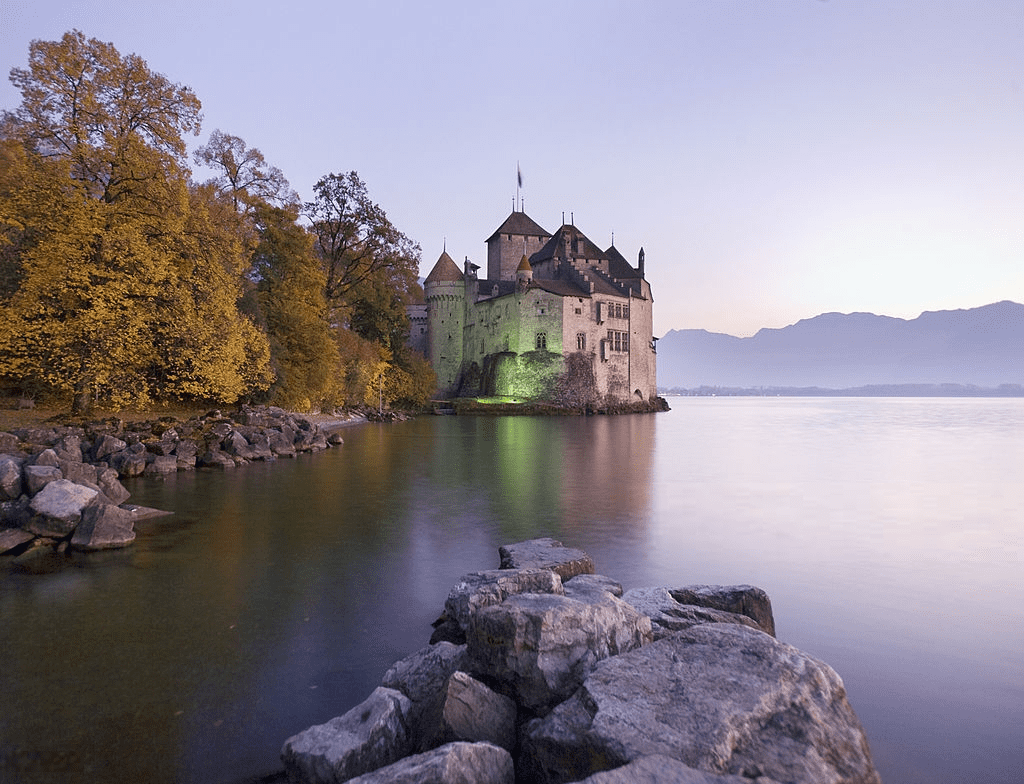 The most visited historic building in Switzerland, the Château de Chillon is situated on a rocky offshore island in Lake Geneva. From the 12th to the 16th century, the Counts of Savoy controlled traffic on the lake from the aquatic stronghold. With its soaring outer walls and multiple towers, Chillon conjures up images of storybook castles. For much of its existence, however, the fortress also served as a state prison. You’ll want to set aside several hours to explore the courtyards, great halls and bedrooms that make the Château de Chillon the most popular castle in Switzerland.

Located in the vineyards near the southeast shore of Lake Geneva, Aigle Castle was built by the Knights of Aigle at the end of the 12th century. Fortifications like a curtain wall and central keep were added in the 13th century. In the 1970s, the municipality of Aigle renovated the castle and opened it to the public as the Vine and Wine Museum. Visiting the museum offers you the opportunity to view original artwork painted in the 16th and 17th centuries. 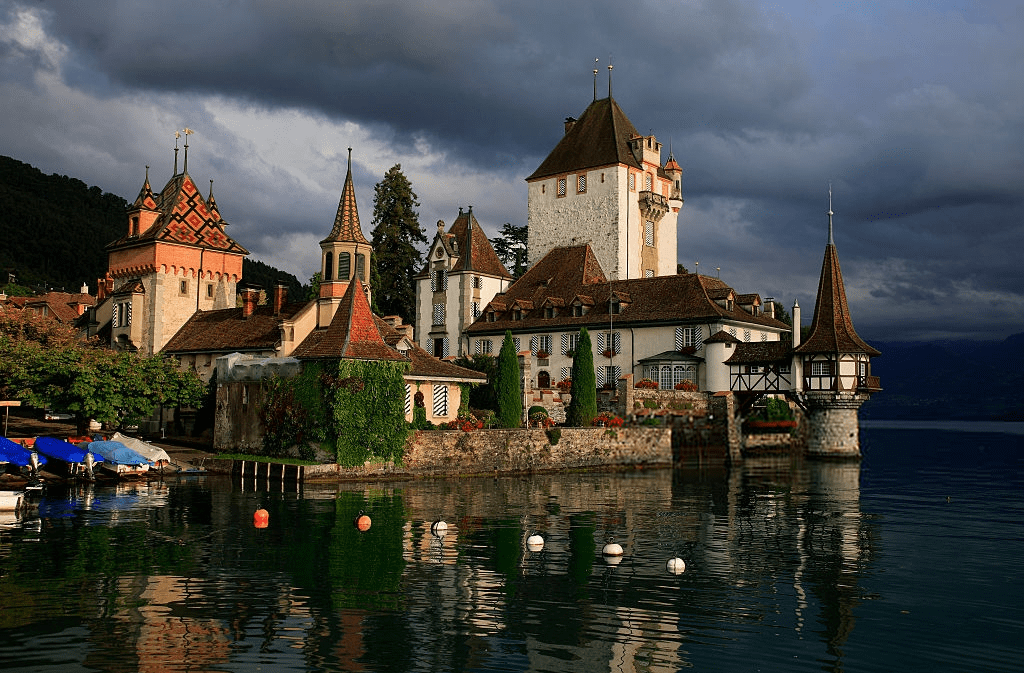 Jutting out over the waters of Lake Thun in the Swiss canton of Bern, Oberhofen Castle has a fairytale charm that’s hard to resist. Construction on this turreted palace began in the 1200s and continued for centuries, resulting in an appealing assortment of architectural styles. The castle’s carefully restored rooms and gardens now serve as a living museum for visitors to enjoy. Standout features include a Turkish smoking parlor and a 13th-century chapel adorned with Romanesque frescoes. 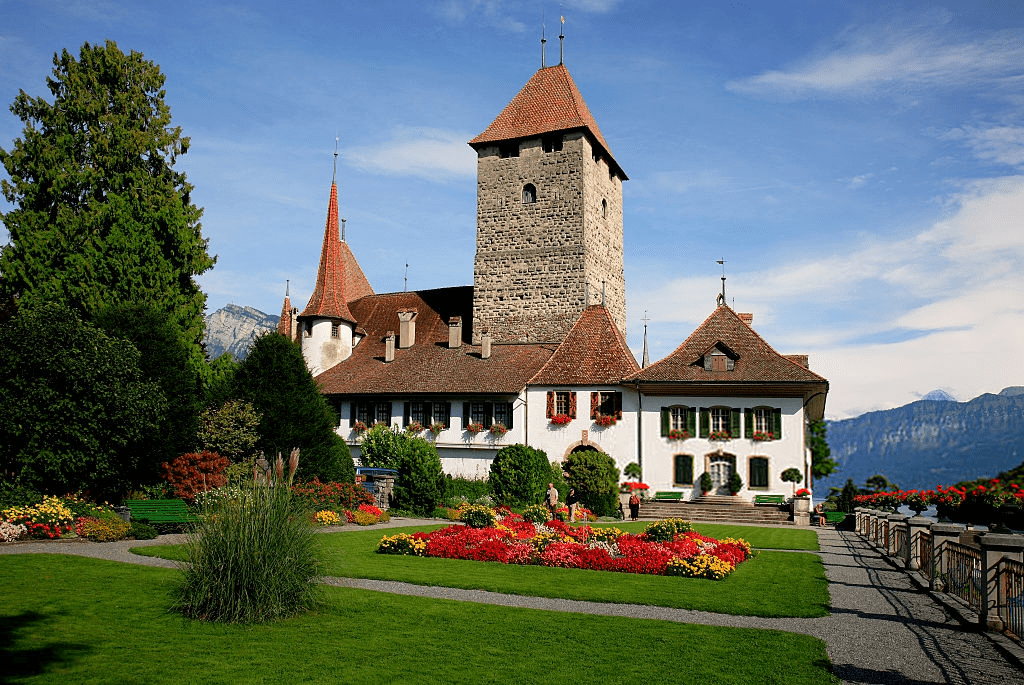 One of the oldest castles in Switzerland, Castle Spiez was built in 933 when much of the western area of modern-day Switzerland was ruled by Italy. Construction on the original keep continued for the next six centuries, offering you a unique opportunity to view a variety of architectural styles. The ancient Castle Church, for example, exemplifies the Early Romanesque style. The court rooms were built in the height of the Renaissance Era. The southern addition was finished in 18th century in the elaborate Baroque style. 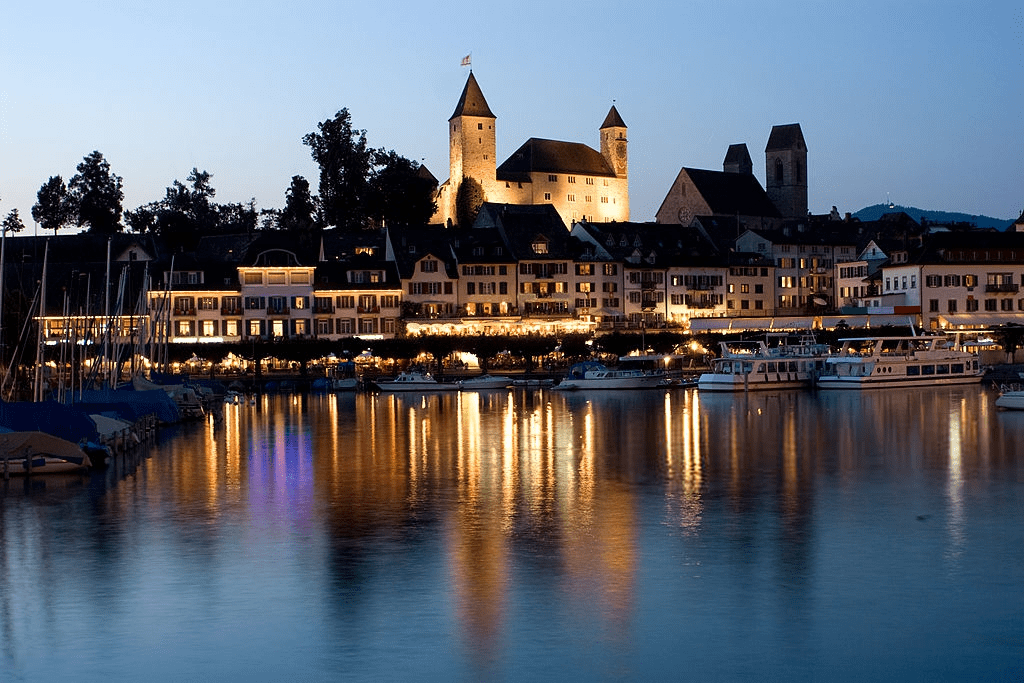 Surrounded on three sides by Lake Zurich, the old town of Rapperswil and its 13th-century castle once played a vital role in controlling the passage of ships on the water. Over time, the triangular-shaped keep fell into disrepair and in 1870, it was leased by a Polish emigrant named Count Wladyslaw Broel-Plater. The count restored the castle and opened it as the Polish National Museum. Touring the museum offers you a rare glimpse of interiors from state rooms to dungeons, all restored to their original medieval glory. 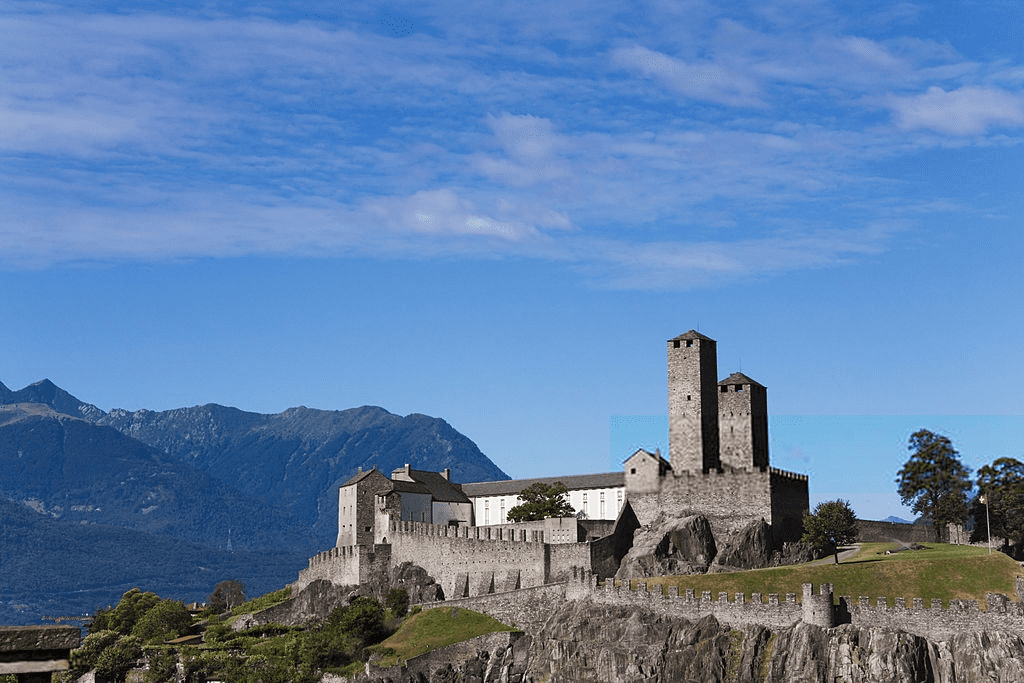 The oldest of the trio of castles that climb the hills of the city of Bellinzona, Castelgrande was built on a site that was first fortified in the 4th century. Easily identified by its striking white and black towers, the newly restored medieval castle stands on a flat-topped hill near the town center. In addition to a flight of steps, a recently installed elevator makes it incredibly easy to access and explore the castle. Open all year, Castelgrande Castle also features two restaurants and a courtyard that’s perfect for warm-weather picnics.