11 of the Most Beautiful Places in Switzerland

11 of the Most Beautiful Places in Switzerland

The most beautiful places in Switzerland aren’t always along the tourist streets of big cities.

Often, they’re hidden high in the mountains, reached only by twisty roads or cable cars, if reachable at all. Sometimes, they’re captured in the reflection of vibrant emerald lakes or the mist of a waterfall.
They may be mixed with the sounds of jingling cowbells in the distance, gushing waters from a nearby stream, or clicking cameras and conversation once they’ve been uncovered and shared time and again.

From castles immortalized by poets to Alpine lakes in every shade of blue, these are 11 of the most beautiful places to add to your Switzerland itinerary. 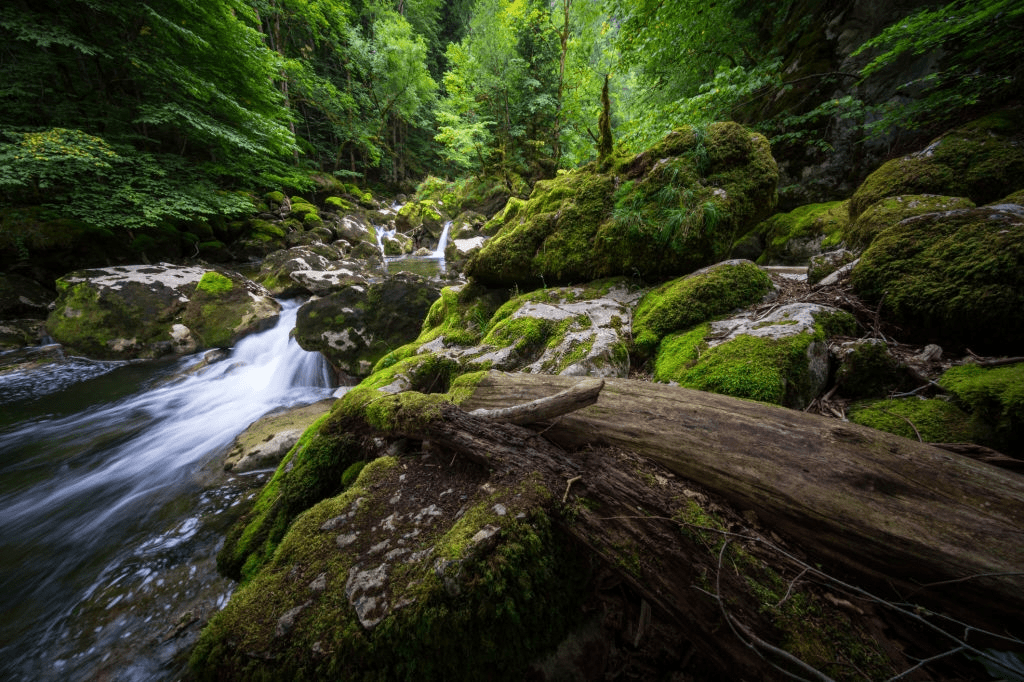 An old stone bridge crosses a rushing stream at Gorges de l’Areuse, where rock walls dotted with greenery create a secluded and quiet atmosphere that looks like the playground of fairies.

If you don’t know about this place, it’s easy to miss, since you’ll have to hike here from the tiny village of Noiraigue, about an hour west of Bern. The path follows an old railroad track that doesn’t appear to lead anywhere special, eventually meeting up with and then crossing the stream to enter the narrow gorge.

The walk to the Saut de Brot bridge from the rail station in Noiraigue takes about an hour, and you can either return the same way or continue on to come out on the other side near the SBB train station in Boudry, crossing bridges, pedestrian tunnels and narrow, winding paths along the way. 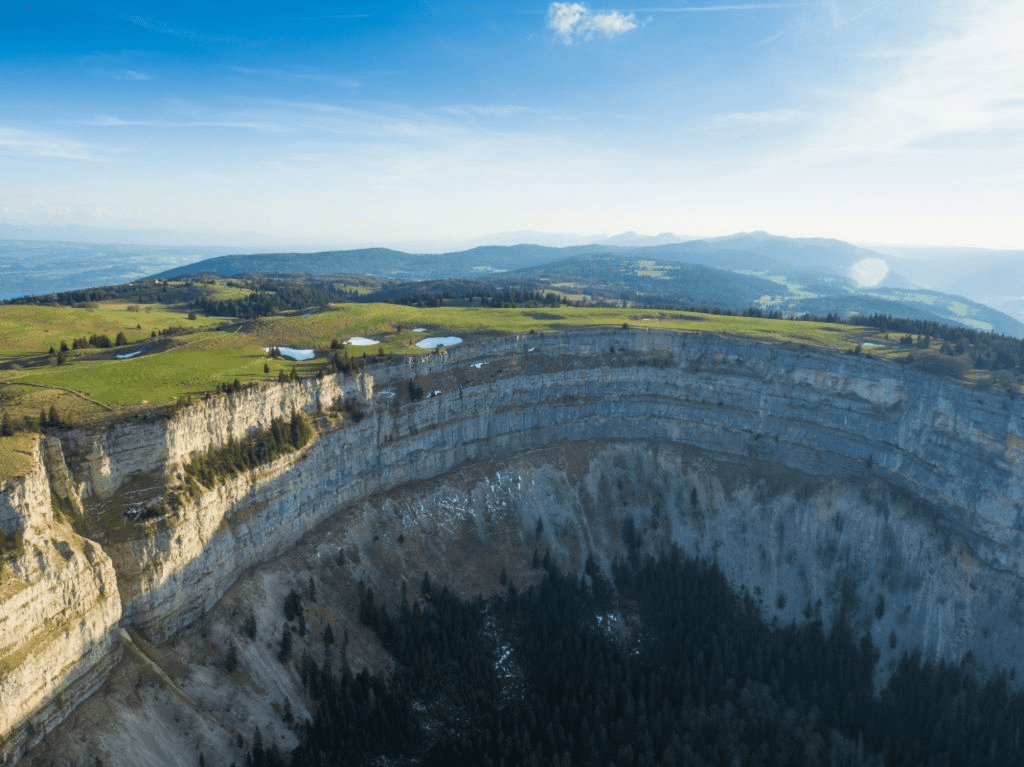 Sheer rock cliffs drop about 500 feet to form the Creux du Van, a wide, arena-like natural feature with a forest of green poking up from the basin.

You can follow trails to the valley from the town of Noiraigue, but if you want to see it from above you’ll have to drive up a winding mountain road to Restaurant le Soliat, where a short walk through cow pastures leads to the rim trail. While you admire the sweeping views and alpine flowers, keep your eyes peeled for native wildlife like lynx and ibex.

The restaurant has overnight accommodations, farm animals and a large parking lot for tourists to access the Creux du Van.

Château de Chillon juts into the turquoise waters of Lac Leman on a rock island, a picture-perfect scene enhanced by the occasional white swan floating by. Inside, grand halls and underground passages now filled with tourists, who come to be transported to centuries past inside the medieval walls.

Just a couple miles away in the resort town of Montreux, you can glimpse a wide vista of the castle from shoreside walkways. Modern restaurants and shops line the streets near the lake, while an older village with narrow stone alleys is a few blocks uphill.

The large crescent-shaped Leman (also known as Lake Geneva) sits on the border of France and Switzerland, and boat rides here offer spectacular views of the Swiss Alps. 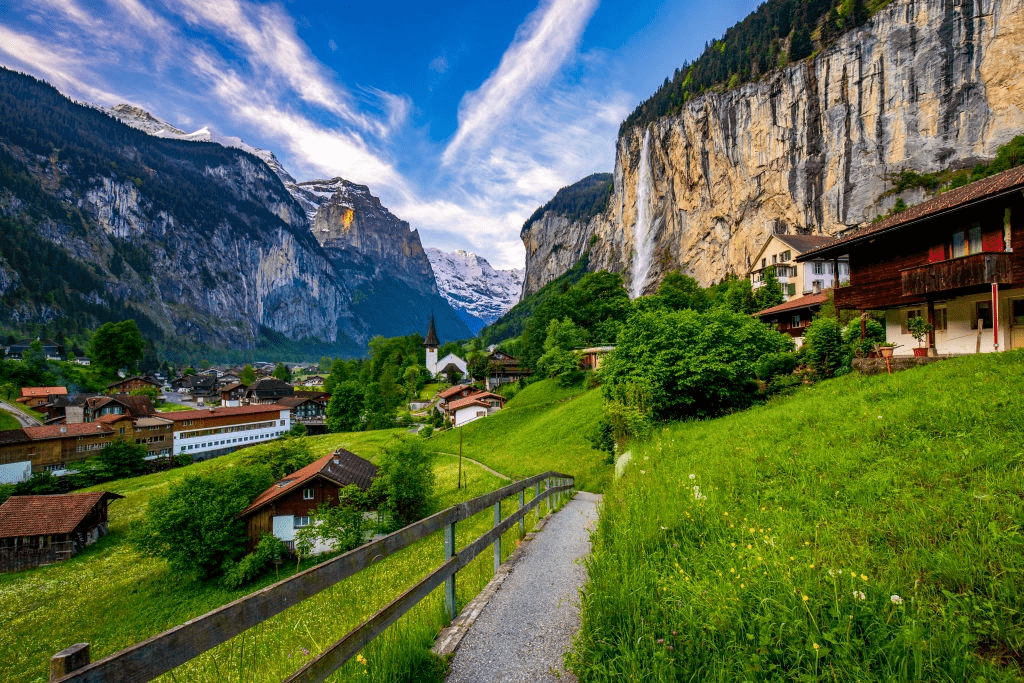 Standing in the middle of the village of Lauterbrunnen feels like entering the pages of a fairy tale. Surrounding mountain peaks hide the valley away from the world. Dozens of waterfalls flow liberally down cliff faces in every direction. And a single white church with a pointy steeple sits on the banks of a gushing milky-blue river.

Staubbach Falls, with its nearly 1,000-foot drop, can be seen clearly from many points around town. It’s one of the tallest waterfalls in Switzerland, and the inspiration of many a picture, painting and poem.

There’s plenty to do in the area if you make Lauterbrunnen your base, from hikes and paragliding in the valley to tourist attractions in nearby Interlaken, but the peaceful feel here also inspires relaxed strolls along flower-filled meadows and quiet fondue dinners at local cafes. 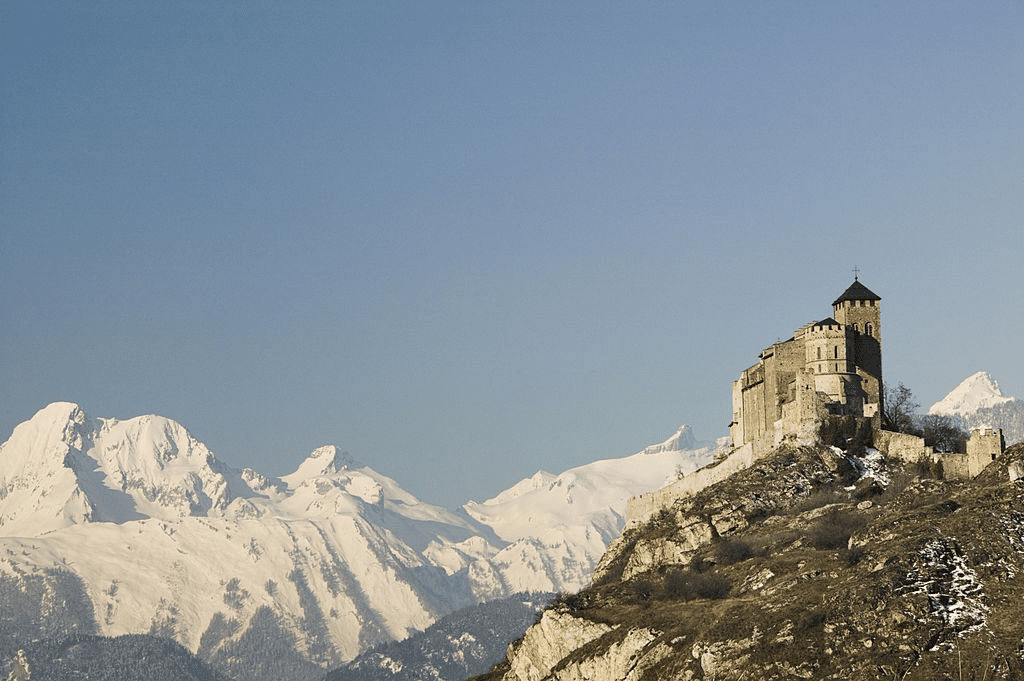 As you approach Sion in southwestern Switzerland, the city’s twin hills immediately draw your eye. Atop each, a fortress overlooks the old town below.

On the highest peak, the walls of Tourbillon Castle encircle a complex of ruins and a chapel from the 15th century full of preserved frescoes. The opposite-facing chateau, Valere Basilica, has roots a thousand years old, and a design that melds Gothic and Romanesque styles.

From the stone streets of Sion, long runs of winding steps lead up to each, but the effort pays off in sweeping views of the city and the neighboring castle with a mountainous backdrop. 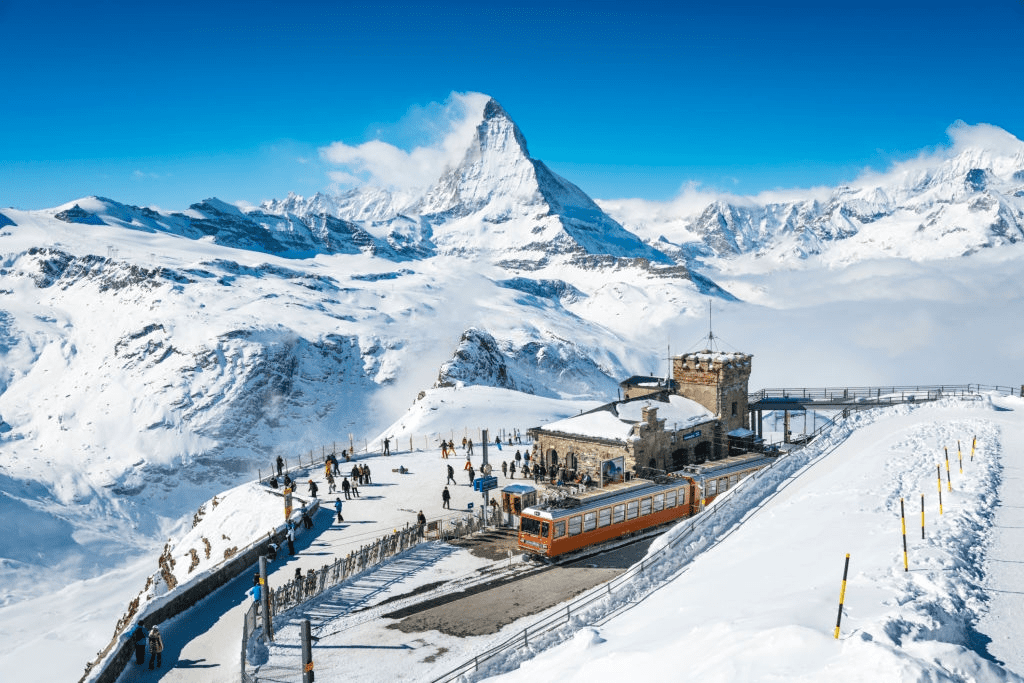 Switzerland’s most recognizable mountain, the Matterhorn sits above the town Zermatt, it’s snowy pyramidal peak poking out from the clouds. You can ride the Gornergrat Bahn train here up to a viewing platform just over 10,000-feet high for the best view.

Down below in the shadow of the Matterhorn, Zermatt is a resort destination, with access to hundreds of miles of hiking and mountain-biking trails as well as year-round skiing and snowboarding up on the slopes. The picture-perfect village streets are lined with bakeries and cafes, sports and souvenir shops, and timber chateaus with window boxes full of bright flowers.

Zermatt is car-free, but a train from the parking garages in nearby Tasch will drop you off in the middle of town. From here you can also hop on the Glacier Express from Zermatt to St. Moritz, an epic sightseeing rail ride through the Swiss Alps.

Tucked into the Bernese Alps high above the town of Kandersteg, Oeschinen Lake is just a gondola ride and short hike from civilization but feels worlds away when you stare into its reflective surface. Chilly waterfalls pour from the hilly surrounds into the bright emerald pool.

If you come to hike, you’ll find miles of trails looping and winding into the mountains above, but kicking back and just enjoying the peaceful scene from the deck of the lakefront restaurant or atop a canoe is a viable option, too. In winter, snowy slopes bring skiers and sledders, and Oeschinensee transforms into a frozen walking trail and in the rare perfect conditions, an ice skating rink.

The village of Kandersteg serves as a hub for visitors to the lake, the main avenue lined with cozy lodges and sidewalk cafes serving up traditional meals like warm rosti (a scrumptious fried potato dish).

To reach the top, you can either hike or purchase a ride on the cable car. Be sure to ask about discounts if you have a Swiss Half Fare Card or a guest card from an overnight stay in Kandersteg. 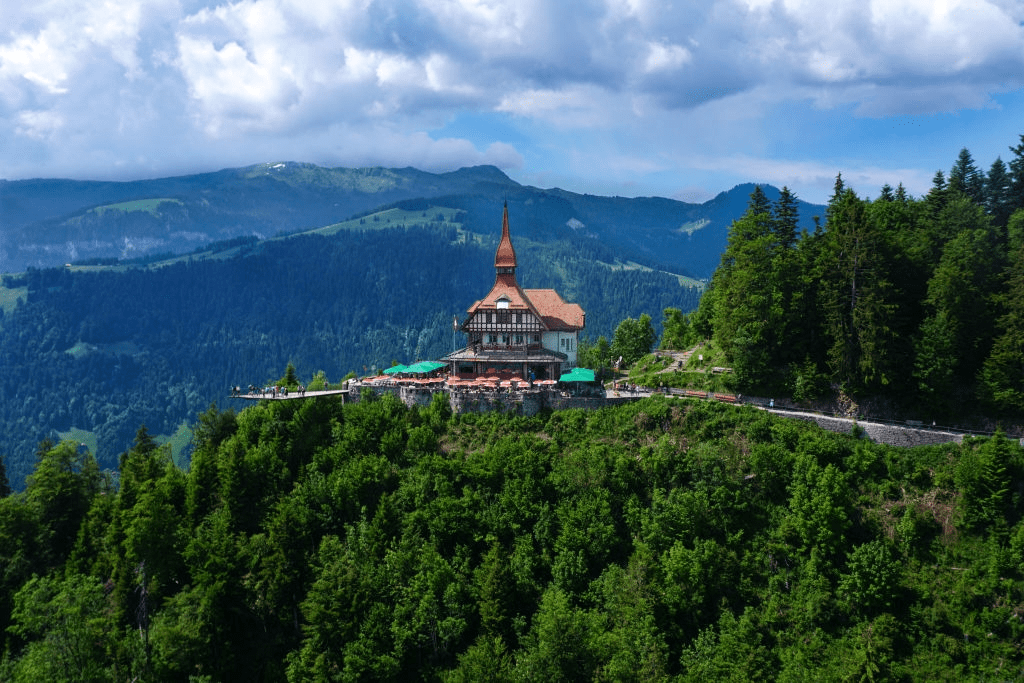 In central Switzerland, the town of Interlaken sits in a little green valley with twin lakes for neighbors and the Bernese Alps looming in the background. The colorful panorama is breathtaking from above — perhaps why you’ll notice so many hang gliders dotting the sky.

There’s no need to fly over the scene to take it all in though. Instead, you can make your way up to Harder Kulm, a viewpoint more than 4,300-feet high. It takes about 10 minutes on the bright red funicular to reach the attraction, where you’ll find a cafe, souvenir shop, and a pointy footbridge that juts out of the hillside between the two lakes. Hiking trails also run-up to the platform, so you can make the journey on foot and return to the bottom on a one-way ticket.

From the top, you’ll be able to see the towns of Interlaken and Unterseen, lakes Thun and Brienz, and several mountain peaks.

Tickets are available from the Harder Railway valley station and the funicular departs about every 30 minutes. 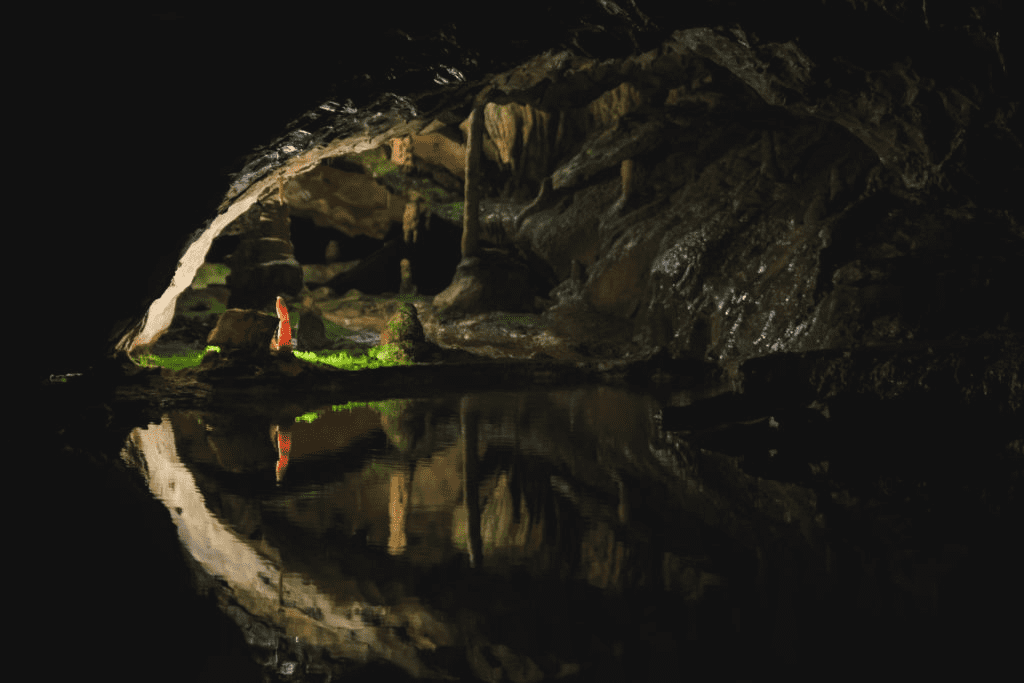 The pathways and tunnels of St. Beatus-Hohlen wind through caves and caverns with hanging stalactites and stalagmite columns. You don’t even have to wander underground, though, to appreciate this naturally formed beauty on the shores of Lake Thun.

Outside, a series of waterfalls spill over rocks on their way into the emerald lake. A soaring cliff face behind and lush greenery all around give the scene a storybook feeling, especially when you add in the wooden bridges that crisscross the cascades.

You’ll need a ticket to tour the caves, but you can walk along the falls for free. A restaurant at the top overlooks Thunersee. 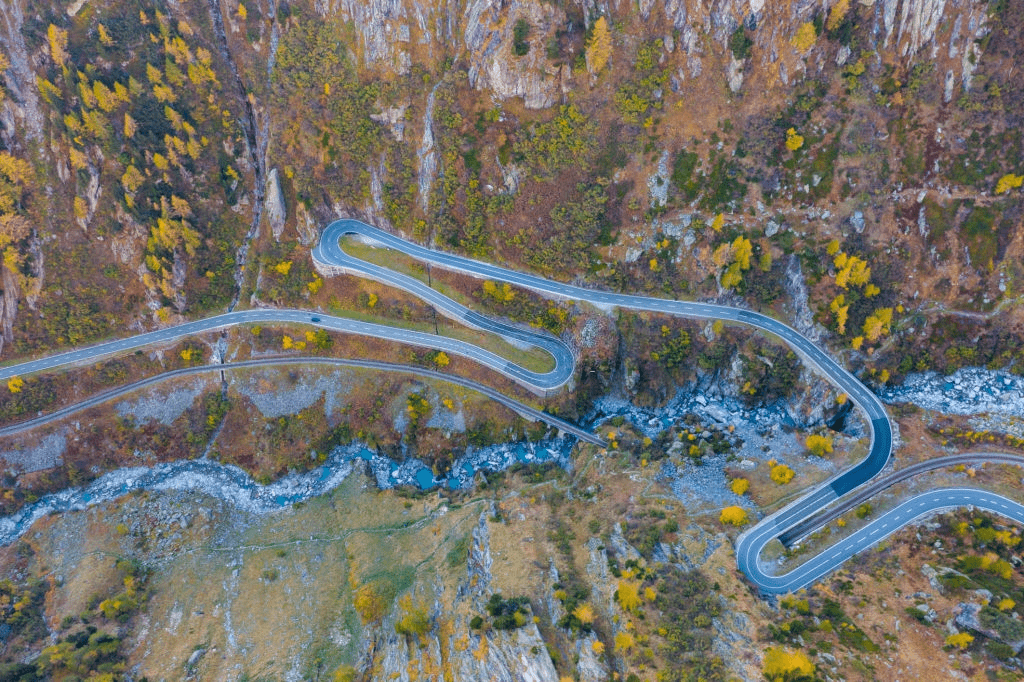 If you’ve ever dreamed of zipping around hairpin turns high in the Alps à la James Bond, the Furka and Grimsel passes are just what you pictured. The two routes neighbor each other in south-central Switzerland, so you can combine them into one epic drive to see glaciers, milky blue reservoirs, and mountain peaks.

The Grimsel Pass connects the valleys of Hasli in the Canton of Bern with Goms in the Canton of Valais, climbing twisty roads to a lake at 7,100 feet before descending a series of hairpins to the nearly abandoned settlement of Gletsch where a hotel from the 1800s opens in summer.

From there, the Furka Pass winds up toward the Rhone Glacier and the striking Hotel Belvedere, which sits in the middle of a U-turn in the road. The property is closed, but the adjacent cafe and shop allow a place to pause for photos and see the glacier up close. The path continues to the village of Andermatt in the Canton of Uri, a ski hub in winter.

The passes open when the weather warms and ice melts away. If you want to spend some time exploring the area, there are plenty of spots to hike, or you can tackle the winding roads on an epic bike ride. 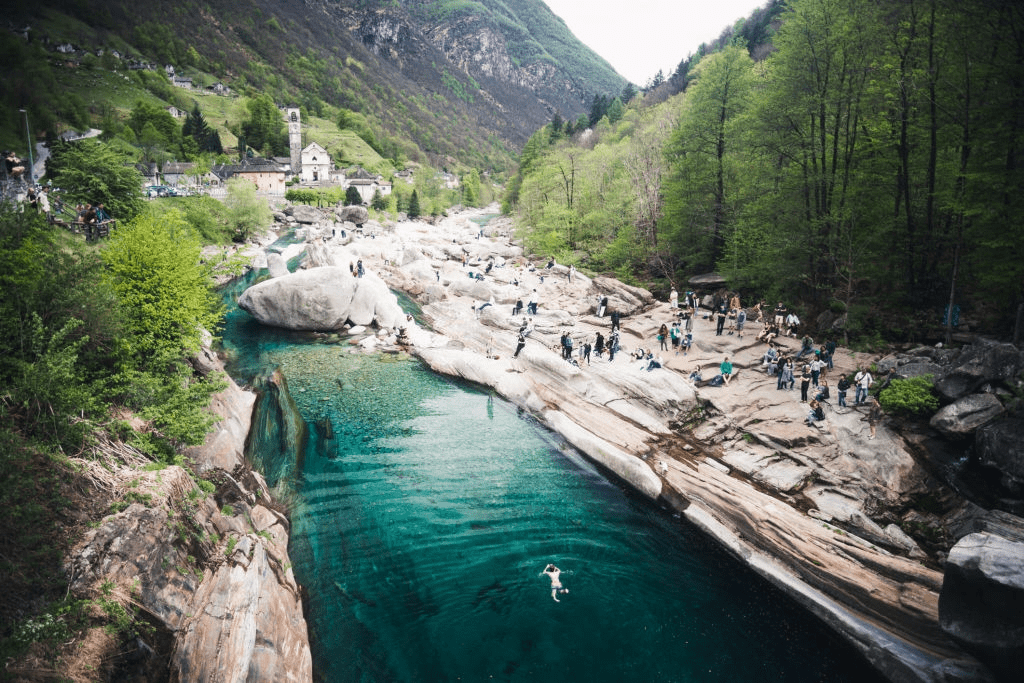 Sparkling clear water with an impossibly green hue weaves through the Valle Verzasca, creating little pools shielded by smoothed boulders along the river. When the sun comes out, crowds gather near the double-arched Ponti Dei Salti bridge in Lavertezzo to claim their spot on the warm rocks and leap into the frigid water for an invigorating swim.

As the names suggest, this area is in the Italian speaking part of the country, just an hour north of Lugano. Despite its popularity in summer, it maintains a secluded feel, tucked away in a valley dotted with small stone villages.

Just a few miles downstream at the Lago di Vogorno, a dam made famous in the James Bond movie “GoldenEye” now hosts bungee jumpers who wish to recreate the leaping stunt from the film.

10 Things to do in Switzerland with Kids

7 Essential Tips to Travel Switzerland on a Budget