Not only are there more than enough fun things to do in Basel for a long weekend, or even a full week, there are also many day trips you can take from the city that can give you a glimpse into both France and Germany on the same trip.

You May Like Also : [Most Read] 10 Top Tourist Attractions in Basel

One thing you’ll quickly learn about Basel is that it’s packed full of great dining options. You can eat really well in this city. Try the fine dining menu at top restaurants like Cheval Blanc or Restaurant Atelier im Teufelhof. Or keep it casual at more traditional restaurants like Kohlmanns (which has a fantastic location right in the city center), or Bodega Strauss, across the street. In Kleinbasel, try Volkshaus Basel, which has your choice of outdoor, indoor, bar, or courtyard seating. 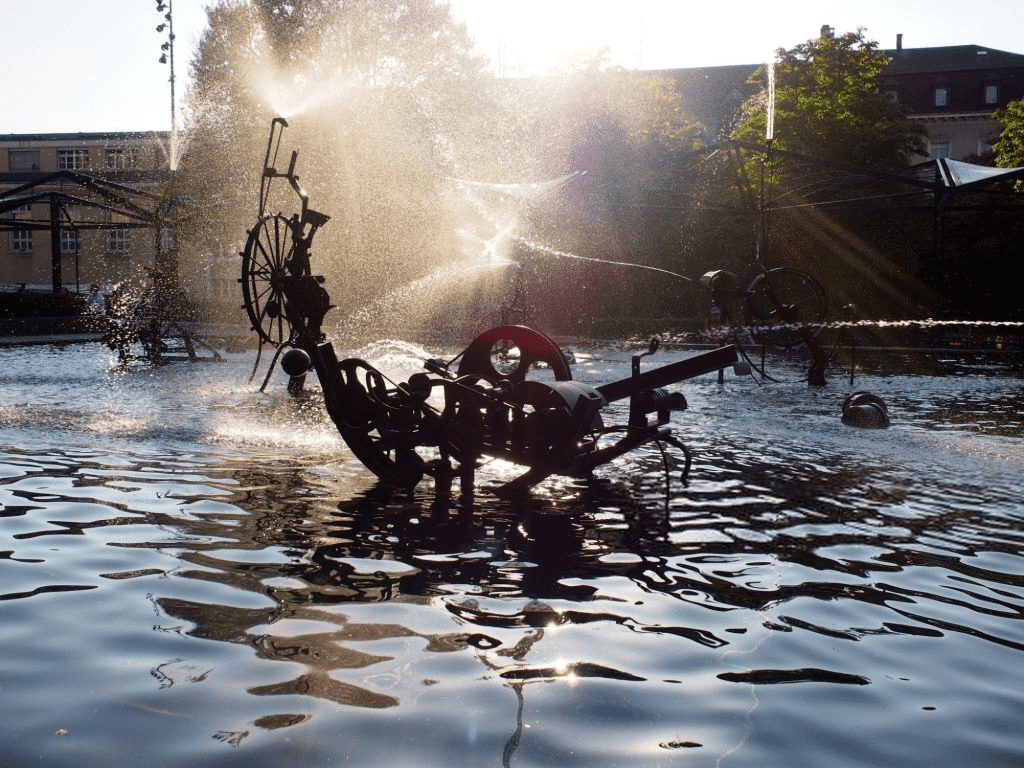 I wouldn’t normally suggest you make a special visit to a fountain, but Tinguely Fountain is different. It’s really unique and fun to watch. The fountain has been in this spot, where the old theater used to stand, since 1977 when Jean Tinguely constructed his mechanical sculptures in a shallow pool of water. The current from the water powers the mechanisms that make the sculptures appear to be playing in the water. It’s sort of mesmerizing to sit and watch the fountain in motion.

As a bonus, just underneath some nearby low-hanging trees is Kunsthalle Restaurant, with outdoor seating that is perfect for enjoying a drink and some traditional Austrian food in the summer weather. There’s also a bar located under the trees, called Compari Bar, which is good for a relaxing moment while sightseeing.

Basel has one of the best preserved old town centers in Europe. There are many things to see and learn about, so a city walking tour is highly recommended. A city tour will take you by many of the main sights and architectural gems in the city. You’ll see the red sandstone Münster, which is a cathedral, and one of the top sights in the city.

There’s also the ornate city hall building, which you’ll want to stand and stare at for a good while as you take in the design and art work on its facade. You’ll walk by the whimsical Tinguely Fountain, where the old town theatre once stood. There is a new, larger theatre just behind the fountain that is used for many different performances. Another interesting landmark is the Mittlere Brücke, aka Middle Bridge, which is one of the oldest bridges built over the Rhine.

4. Try many different cuisines at Markthalle.

While Basel has many fantastic restaurants, sometimes you just want something more casual, and slightly different. That’s when a stop at Markthalle (not to be confused with the Marktplatz) really pays off. Basel’s Marketplace building used to house a regular indoor market, with fruit and vegetable stands and freshly baked bread stands. It’s now received a giant makeover. It currently houses over food venders, making food from all over the world. During lunchtime, you can grab a few things and eat at a table in the center of the hall. During the evening, a bar opens up and music and entertainment begins.

Make sure you stop for a glass of wine at Vino e / y vino, a locally owned wine store that offers a rotating selection of wines from the area, as well as all over the world. They are super friendly and helpful.

5. Take a boat ride on the Rhine 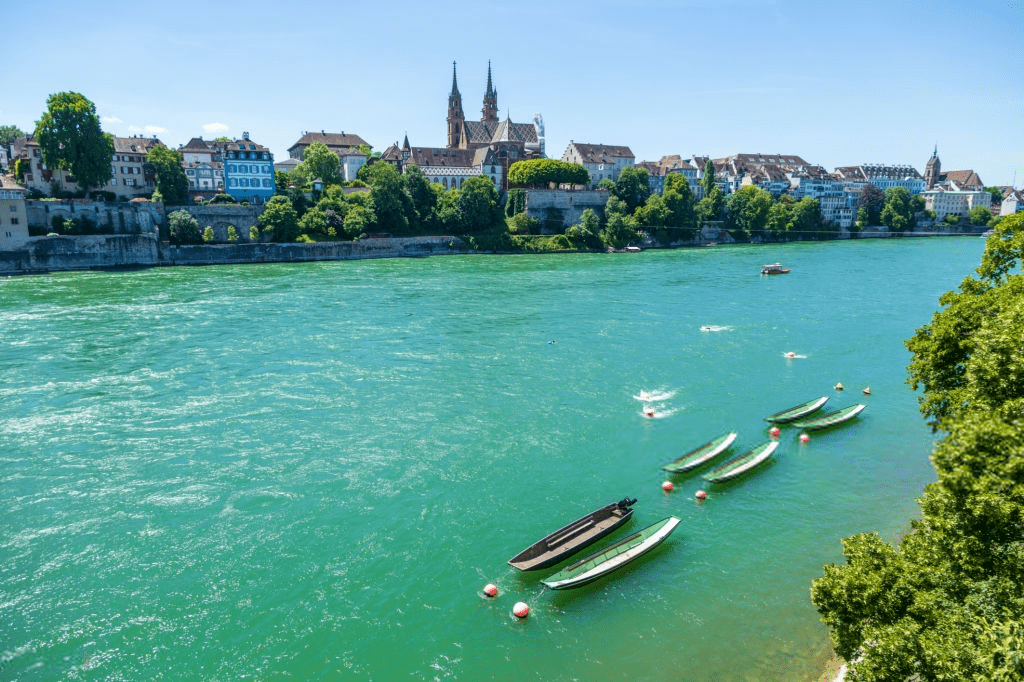 There are a couple of different boat rides you can take on the Rhine. My favorite one is the Fähri boats that shuttle people from the main part of the city into Kleinbasel on the northern banks of the river. The boats use the current to push them across a cable extended between the shores. If you have only a little bit of time, you can take the ferry across to Kleinbasel in about 15 minutes, weather permitting.

The other way to take a boat ride on the Rhine is on a city and harbor tour. There are various tours you can take with Basler Personenschifffahrt, which offers regular cruises on the Rhine from March to October. There’s a one-hour harbor tour that’s perfect for seeing the major sights from the water. 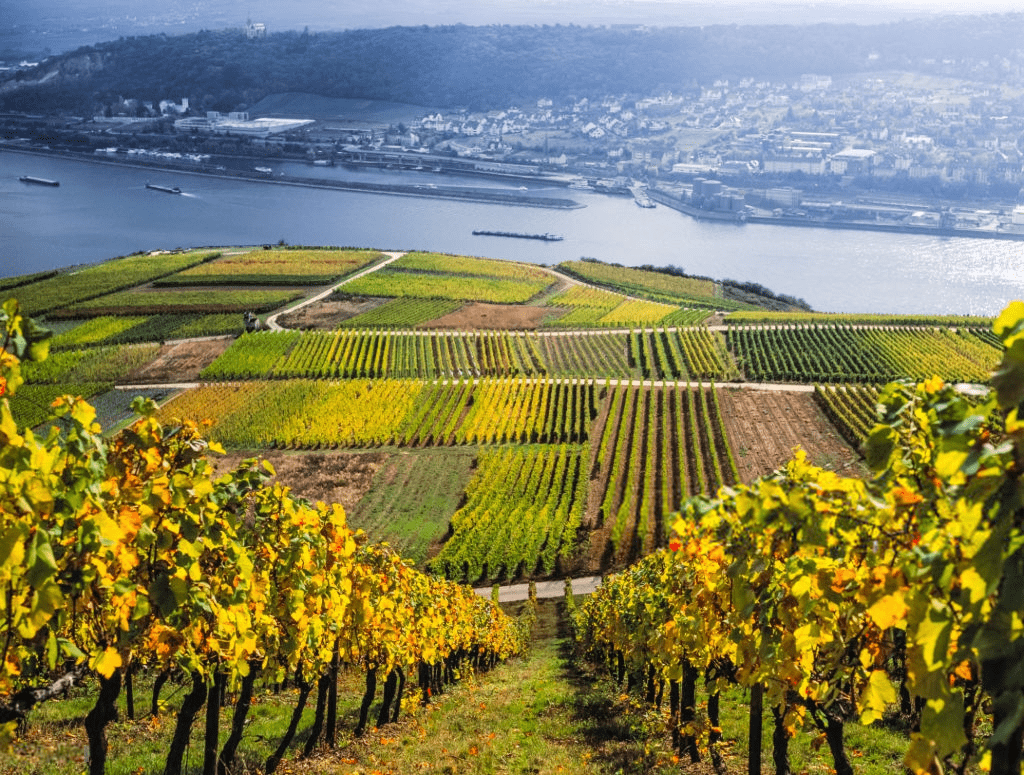 Although this part of Switzerland is not particularly known as a wine region, there is, nonetheless, a lot of wine produced in the surrounding area. One of the wine regions closest to the city is in neighboring Germany, called Markgraflerland, where the Gutedel grape is grown. Other popular grape varieties in the region include Müller-Thurgau, Grau Burgunder, Weiss Burgunder, and Spätburgunder, which is also known as Pinot Noir.

You can easily take a day trip to this wine growing region of Germany. You can rent a car in Basel and drive the 20 or so kilometers to Mullheim, the center of Markgraflerland, or you can take a train and get around by taxi once you arrive. There are a number of great wineries you can stop by for a tour and tasting, within a few minutes of Mullheim.

7. See the art exhibit at the Foundation Beyeler 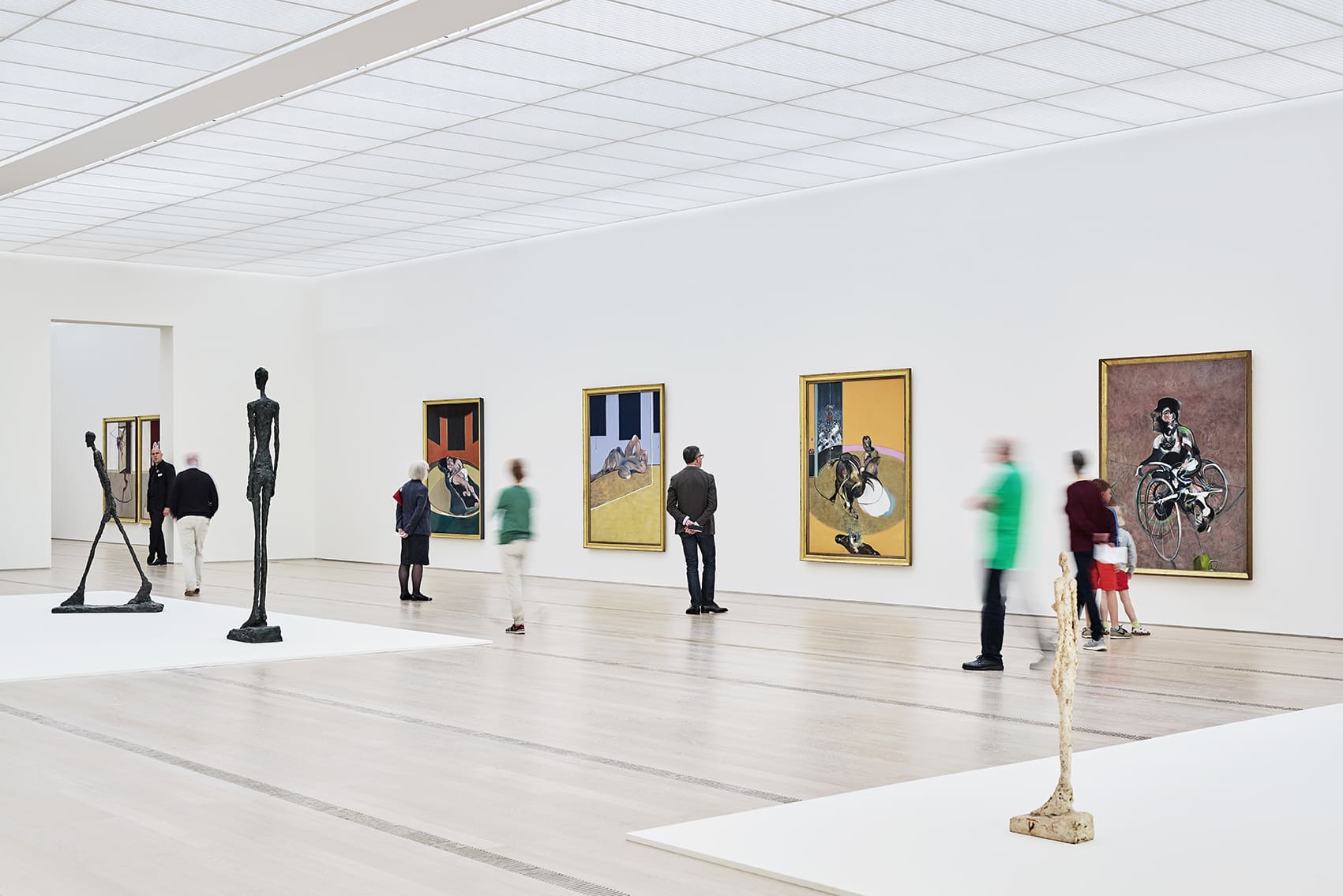 Foundation Beyeler is one of the most visited and highly respected art galleries in Basel. It was built to house and exhibit the personal collection, nearly 200 paintings, plus African tribal art, of Hildy and Ernst Beyeler. The Foundation is fully funded and features special temporary exhibits alongside the permanent collection. During our visit, we were lucky enough to catch the end of the Monet exhibit. The visit is well worth the 20-minute tram ride it takes to get there.

In order to avoid long lines (particularly in the busy summer months), it’s best to purchase your ticket online before making your way out there. It’s always best to avoid the middle of the day, as that is when lines are at their longest.

PRO TIP: This is only one of the many museums in Basel. There are somewhere around 40 different museums and collections to see in the city. You can save up to 50% on these and many of the other attractions we’ve listed here with the Basel Card, which can be purchased for a 24- or 48-hour use period. Basel is an expensive city, so if you plan to visit numerous attractions, you can save a significant amount with the Basel Card. 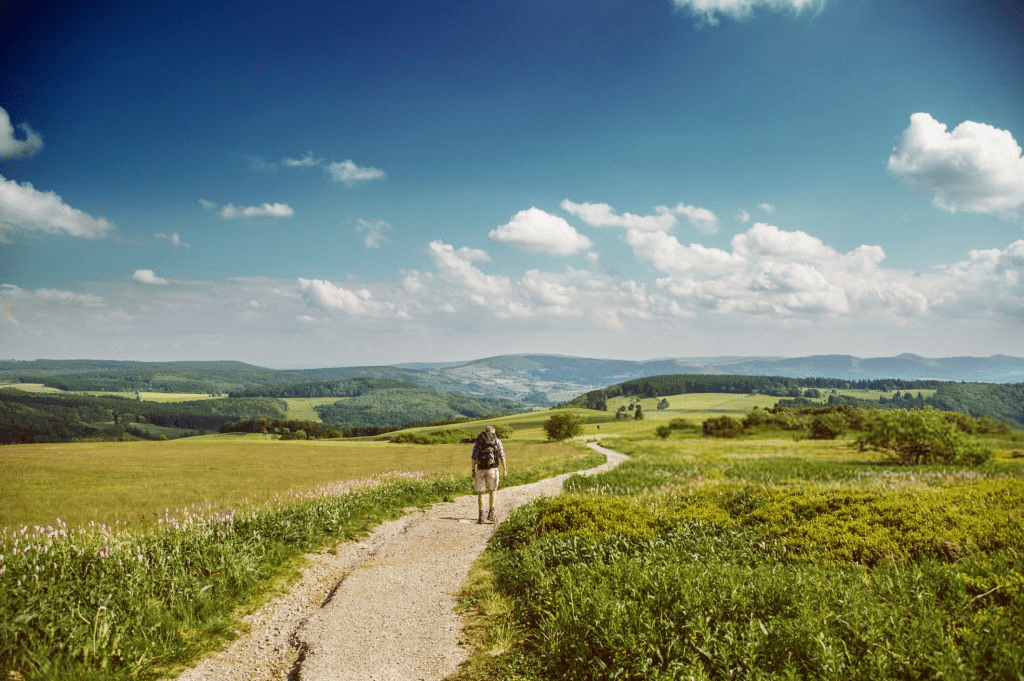 The Swiss company, Swatch, teamed up with German artist Tobias Rehberger to create an innovative art trail called “24 Stops Rehberger Weg”, which is a cross-border project linking Switzerland and Germany along a six-kilometer path starting at the Fondation Beyeler and ending at the Vitra Design Museum. If you’re already making a stop at Foundation Beyeler, why not go for a little walk along this 6km path. While the art is a bit confusing at times, the colorful sculptures do make great path markers and urge you on to the finish. The best part about this walk is that it meanders slowly through the vineyards that line the path between the two countries.

PRO TIP: The bus back to Foundation Beyeler from Vitra Design Museum only comes every 30 minutes. If you’re like us and only have a city bus pass for Basel, you’ll need another way to pay for bus fare (as the Vitra Design Museum is in Germany – they typically only accept euros.)

9. Go on a chocolate tasting tour

What if I told you there’s a chocolate tasting tour you can go on in Basel? You’d immediately book tickets for it, right? It would be a sin to turn down a chocolate tour in Switzerland! Luckily, I’m telling the truth – there really is a chocolate walking tour in the old city, put on by the company Xocotour Suisse. The tour takes about 2.5 hours and visits some of the top chocolate shops and traditional confectionaries, plus a stop at a chocolate factory to see the process of making chocolate. Of course, there’s a lot of tasting and sampling going on during the tour too. You may just end up a chocolate-eating expert by the end of it.

The Basel Marketplace (Marktplatz) is where you’ll find the City Hall building, which itself is a top sight to see in the city. However, the Marktplatz is also home to a daily outdoor market, where vendors sell local produce and food products. It’s a lively area, and one you’ll likely visit fairly often in Basel. It’s a transfer point on the tram that provides well-connected public transportation for the city. Make sure you take some time to stroll through the various stalls and try a few local products.

——————————————
Basel is located on the northwestern border of Switzerland. The airport you fly into is shared with both France and Germany (note to self: make sure you go out the Switzerland exit at the airport!).