The world’s longest pedestrian suspension bridge has opened in Switzerland, inviting walkers to brave a narrow path running 86 meters above the ground at its highest point. The Charles Kuonen Suspension Bridge, in the Swiss Alps, near the village of Randa, is a record-breaking 494 meters long and connects Grächen and Zermatt on the Europaweg foot trail. 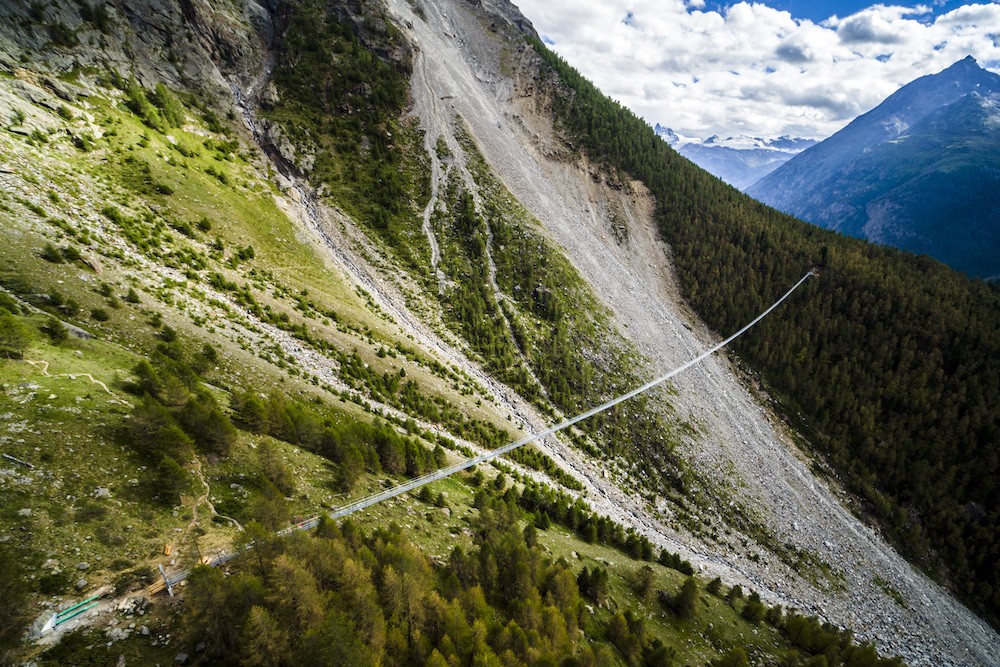 You’ll find the bridge in Randa, Switzerland, and it looks like something out of a fairy tale. The bridge, opened in August 2017, cuts through the picturesque Swiss Alps at a dizzying height of 282 feet (86 meters) above ground at its highest point. That’s the height of 16 giraffes stacked one on top of the other. (Curiosity does not endorse giraffe-stacking.)

The bridge, which is a steel construction, runs between 1,600m and 2,200m above sea level, with views – if you can look at them – of the Matterhorn, Weisshorn and the Bernese Alps in the distance. It replaces a previous bridge that had been damaged by rock falls.

Maintaining a bridge here is quite the gift to hikers, who would otherwise have to hike four hours to get to and from the towns of Zermatt and Grächen. With the Charles Kuonen Suspension Bridge, the trek is now 10 minutes — if you’ve got the guts, anyway. If you don’t want to look down while traversing the Swiss Alps valley via this bridge, just look around you. The Matterhorn, Weisshorn, and the Bernese Alps are visible in the distance: a view that might just be worth the acrophobic terror.

Stay in Budget with best Hotel in Basel, Switzerland:

How to get there?

Incredibly, it took engineers from Swiss rope and Lauber cableways just 10 weeks to erect the bridge. The structure, which is just 65cm wide, takes 10 minutes to cross; a journey that previously took hikers four hours. It breaks a record previously set by a glass-bottomed suspension bridge completed last year in China. The 430 meter-long bridge traversed the vast Zhangjiajie Canyon in Hunan province, with a 300m drop beneath it.

While the bridge’s height has removed the risk of rockfall, more height-averse hikers may want to plan ahead before making the trek. “People who have problems with a fear of heights, they have to close their eyes, or have someone to walk just behind,” Zweifel said.
swiss valais blacknose sheepswiss valleyswiss valley apartmentsswiss valley campgroundswiss valley farmsswiss valley fenceswiss valley furnitureswiss valley parkswiss valley ski
3 FacebookTwitterPinterest

Things to Do in Grindelwald, Switzerland